Today, we face a genuine and unprecedented mega-crisis in Afghanistan. Biden has abandoned the country to the radical Islamic Taliban, leaving tens of thousands of Americans, Allies, Christian believers, and Afghan interpreters and workers behind—all awaiting the evacuations they were promised but have not yet received.  According to the August 17 India Times, the real number of stranded Americans alone is 40,000!  But earlier the same day, the White House and the Pentagon set the number at a mere 5,000.  The Epoch Times later reported that the Administration admitted to 11,000 stranded Americans.  Not only are thousands of Americans stranded, but Biden has no plan to rescue them.  According to Fox News, six weeks ago Biden was saying he doesn’t trust the Taliban.  On August 18, Biden said he is depending on the Taliban to give Americans ‘safe passage’ out of the country.   Breitbart reported that Biden officials told Americans trapped in Afghanistan, “we cannot guarantee your security.” Their most recent reassurance is “We don’t have the capability to come in and get you.”  His administration has callously instructed Americans to make their way to the Kabul airport—through a gauntlet of Taliban fighters and without any promise of safety or security.  How many deaths, abductions, or hostages will result from this failed policy?  We are only left to pray that it does not become a more deadly event than the attacks on September 11 that precipitated the war in the first place.

Compounding the Administration’s damage, allies and foreign leaders were not consulted or warned of real time developments, sophisticated US military weapons technology and defendable bases were abandoned to the Taliban’s control, and the Afghan population—as well as thousands of U.S. citizens—were given no US protection whatsoever from the widespread political or religious reprisals, brutal torture, and execution-style murders.  On August 19, Fox News said the Pentagon admitted that it had evacuated only 2,000 persons, only about 300 of which were Americans.

Last month the Wall Street Journal reported that Biden well knew the US pulling out of Afghanistan would produce a military collapse and utter chaos, yet this month he carried it out anyway.  What could be at the root of the US abandonment of Afghanistan and its immediate political and military collapse?  Is the Biden Administration really that incompetent?  With Biden’s growing record of failure, we must examine if President Biden alone is behind the series of policy failures and orders that resulted in all of this chaos.  Biden’s increasingly obvious mental incompetence forces us to wonder if Biden is merely a puppet for more powerful forces lurking in the shadows.

Might all this chaos be the foreseeable result of foreign or ‘deep state’ interference?  Is it possible that Biden is taking orders from China, with whom he already has a history of corruption?  With nearly half a century in the Washington swamp and eight years in the Obama administration, what influences are driving his agenda to destroy American power, economic strength, and credibility in the world?

While we don’t have enough information to draw firm conclusions yet, we can begin with the simple question: Who stands to benefit the most from the United States’ abandonment of Afghanistan?  Might it be China, who is standing by ready to harvest the three trillion dollars in rare earth minerals still resting in the Afghan mountains?  After all, China was the first nation this week to recognize the new Afghan Taliban government.  US military experts report that China is already building roads into Afghanistan and making plans to sell some of those rare earth minerals to Iran, to further enhance its nuclear ambitions against Israel and other nations.  If we follow this trail of bread crumbs, it becomes evident that China may be reconstituting the “Axis of Evil” that President George W. Bush rallied us to dismantle twenty years ago.

China is mocking President Biden’s failure and reveling in the loss of confidence in American military might.  The communist nation is also openly declaring its next move—they intend to pressure Biden to abandon Taiwan!  On August 17, CNS reported that the Chinese State Media Outlet stated the US will ‘abandon’ Taiwan, too, ‘once a war breaks out.’  Meanwhile, China is rapidly preparing to make its move on Taiwan.  Since early this year, both Breitbart and the Chinese state media have been reporting stories like, “The Chinese People’s Liberation Army (PLA) held military drills featuring warplanes near Taiwan as part of ‘military struggle preparations against the island,’” and accounts of “China war games simulating tank battles on the streets of Taiwan.”  To counter China’s actions, Taiwan is doing its best to prepare an effective defense against a future Chinese attack, conducting its own war games simulating defense for an impending invasion.

Throughout all this chaos, Americans have seen no effective leadership from the Biden Administration.  They have demonstrated zero evidence of compassion towards the suffering masses, zero evidence that any of the actions taken to date were done for humanitarian reasons, and zero evidence that any of these actions were taken to further the best interests of the American people.  None of the Administration’s actions taken to date display effective governance.  However, all of their actions do shift the balance of power in the world towards China’s favor.

It’s beginning to look like all that data on Hunter Biden’s laptop about secret China-Biden deals and billion-dollar payoffs—data hidden at all costs by a corrupt mainstream media—is real, it is factual, and may even one day become admissible evidence against this Administration.

May God have mercy and shed His grace on the United States.  Let us pray that corruption will be exposed and more details will come to light, that justice will be executed upon traitors of the United States, and that a generation of righteous leaders and reformers will arise to make our nation the lighthouse for the globe it is called to become. 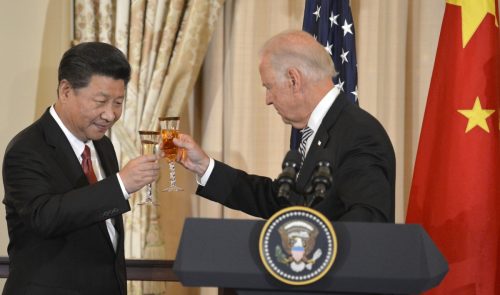 Edward Fickess is a strong believer in the Apostolic message of “Jesus Christ and Him crucified,” a strong advocate of the United States Constitution, and in nurturing strong Christian family values in American culture. He and his wife of 52 years have pastored an inner-city house church for almost 20 years. Ed served his country as an Air Force officer and pilot during the Vietnam era and has served as a Federal trial attorney and manager for over 27 years.